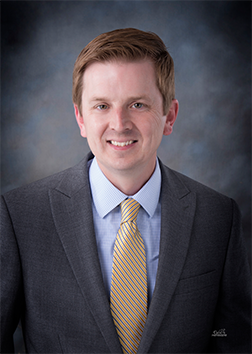 Dr. Dustin Volkmer is an orthopedic surgeon and sports medicine specialist who has been seeing patients at Columbus Orthopedic & Sports Medicine Clinic since 2013. He focuses on arthroscopic, minimally invasive treatment. In addition to his practice in orthopedic surgery, Dr. Volkmer specializes in sports medicine, with an emphasis on performance enhancement, treatment and injury prevention. He is director of the sports medicine team at Columbus Community Hospital, working closely with local athletic trainers to care for athletes. He has a special interest in treating athletes, and strives to work with patients to bring them back to their desired level of function.

Dr. Volkmer completed his undergraduate education at Creighton University in Omaha, Nebraska, and received his medical degree from the University of Nebraska College of Medicine in Omaha, Nebraska. He then completed a five-year orthopedic residency at Loyola University Medical Center in Chicago, and a sports medicine fellowship at Kerlan-Jobe Orthopaedic Clinic in Los Angeles. He is board certified with the American Board of Orthopedic Surgery and has a subspecialty certification in sports medicine. He is a member of the American Academy of Orthopedic Surgeons, American Orthopaedic Society for Sports Medicine and Arthroscopy Association of North America.